I had this wonderful genetics/biology teacher, Dr. Lewis who gave weekly quizzes, and she explained that students were more prepared and learned the material far better than classes without weekly quizzes. And I have to say, I probably learned and retained more information from her classes (I've taken three of her classes), than any other class I've taken thus far. She would also provide Scientific American articles as part of her lectures, which I absolutely loved and found fascinating! Best teacher ever! Who knew genetics and biology could be so fun?! :)

Anyway, I'm not a teacher, but I think posting these videos will serve as my weekly quiz to summarize and implement what I've learned. I think this would be a good idea because:

2) Better memory/understanding - short term information/memory can be applied to what was learned during the previous week by reviewing the video and blogs, which can be converted to long term memory for better understanding and processing

4) Be better prepared - obviously I'll be more apt to practice if I have to post a YouTube video! Hmmmm...so maybe having more recitals or performances would be a beneficial learning tool? Just a thought...I know I practiced more when my recital was getting closer!


Below is my completed Practice Log, Week #2:
I took a break on my b-day, but posted some blogs because I decided I wanted to have a one year cello goal. I also decided to take breaks on lesson days so I could write down/blog my thoughts and think about what I'm supposed to have learned. There was something I read about visualizing and thinking about performing an action (before actually performing it) to increase the likelihood of performing it correctly....hmmm...I better look that up/find that article! 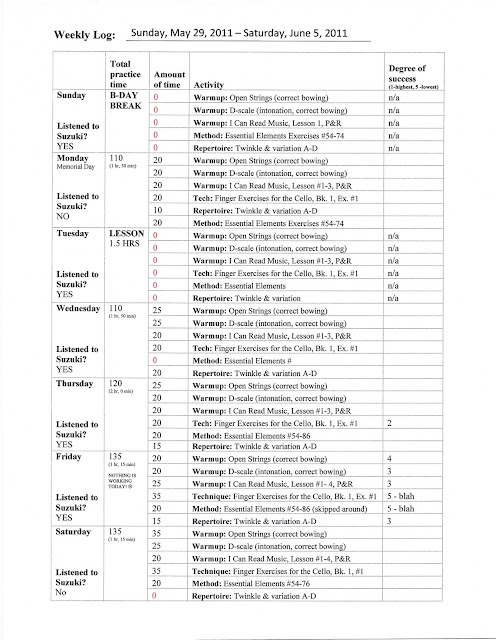 My video of Exercise #1 from Finger Exercises for the Cello:
This is really painful to watch... awful...awful...awful...However, in a few months I can look back and (hopefully) see some tangible differences! This is after one week of practice.

Lots to work on:
1) My wrist isn't bending like it should
2) Way too tense - my shoulders are up in my ear
3) My bowing isn't straight
4) Intonation needs work

Below is a video of me attempting to do a straight bow! Darn bow keeps pointing upwards when I do a down bow...grrrr....

I was going to re-do Twinkle, post a video of the Twinkle variation I was working, and a Essential Elements song, but I had such a hard time posting these two videos that I gave up! Maybe I'll rotate between the videos I post.

Computers and laptops hate me....they always seem to break when I'm around! My husband says I have an uncanny ability to break all things mechanical. I broke my other laptop (second one this year and I broke my iphone this year too!), so I used my husband's laptop and it took me forever to figure out - different software, hardware, etc. It's also the reason why the sound is so crappy...or maybe its just my playing! :)
Posted by Gemini Cello at 10:17 PM