I arrived early for my lesson and was able to warm-up in one of the student practice rooms before my lesson, which was really nice because it helped me relax and get my fingering and bowing down. It always takes me at least 15-20 minutes of warming up before I can play the way I want to.
I also discovered my sound was much louder from the last time I used one of the practice room, which had been a couple of months since most my lessons are now at my teacher's house, and I was pleasantly surprised that my sound didn't sound too bad!


We worked on Minuet No. 2 which went fairly well, even though I didn't get to practice it much because I was swamped with end of semester assignments. I think I was just on a roll because everything was sounding fairly decent to me - although warming up definitely helped!


Anyway, we worked on using more bow and better timing, especially on slurs, but overall not too bad. After my lesson, my teacher sent me a message that I could start Book 2 if I wanted! Yaay!  :D.
I'm not a complete newb any more - well, a semi-newb... half newb? Yaay! :).


Although that means I need to record Minuet in C before moving on to Book 2. I don't like working on more than two pieces at a time, otherwise I can't really focus on each piece and everything just sounds too sloppy to me.
Okay, so goals for this week: no starting on Book 2 until I get Minuet C recorded... ugh... if I record that on Wednesday, than that should give me a few days to work on Long, Long Ago in Book 2 before my lesson, that is if I don't procrastinate. hhmmm...I should really be practicing cello instead of catching up on my blog entries then...
Posted by Gemini Cello at 5:19 PM 1 comment:

I was taking an evening course at the college with Adam as the instructor, and for my cello final, I had to play Minuet in C.

I had a scheduling snafu and showed up early (and on the wrong day?), so I tried to get out there as quickly as possible so I wouldn't have to do the final right then and there (so I could have more time to practice), but unfortunately Adam just had me do the final since I was already there! ...darn...

We warmed on on C major, and I noticed my volume and location of my bow improved a bit, although I thought I sounded really scratchy and harsh. I had been focusing on playing closer to the bridge, which was driving me a bit nuts at times because I didn't like how it sounded, but it definitely forced me to pay attention to my bow and string connection and weight of my arm.

After the warm-up, I played Minuet in C once through and was done. Although he had said I could do it a few times, he thought the first run through was fine.


I forgot to take a video of me during the practice, so I'll have to record a video next weekend. I'm still not very happy with how this piece sounds, but I think I've become comfortable playing this so it's getting there.
Posted by Gemini Cello at 5:17 PM No comments:

This was an interesting lesson. I was working on adding more weight into the bow and Clayton suggested that we do some "body mapping" to help with my body awareness, and to relax my arm to get more weight into the string. We discussed what using my whole arm entailed, and visualizing my collarbone being included in my arm movement.

We went over "leading" with the arm, as I was using more of my hand again to do some bow changes instead of my larger muscles.

He also recommended that I read: What Every Musician Needs to Know About the Body: The Application of Body Mapping to Music by Benjamin Conable.

This was an interesting lesson, but I won't go too much into detail because I think he may be writing a paper on cello technique that may have some information that we covered.
Posted by Gemini Cello at 2:48 PM No comments:

We went over extensions and slurs during this lesson.
Adam said it would be helpful to know that whenever I play in a flat key, there will be an extension, or if there are three sharps or flats there will always be an extension so I can prepare to do extensions.

Extensions:
I was having issues with my first finger when I was practicing scales as it was too flat. The culprit was that I was working on extensions and wasn't returning my first finger back to its correct position. He reminded me to remember the spacing between the 1st and 4th finger and to move them as a unit. Also, I was moving my elbow too far forward.

Posted by Gemini Cello at 7:20 PM No comments:

We had a couple of interesting conversations regarding what it means to "grab a string" and the different tones and sounds a cellist can achieve. Clayton recommended googling the cellists listed below and listening to the same Bach Suites; paying close attention to their tone and sound. Being the newb that I am, I only knew of two of the cellists he gave me, and have only listened to Pablo Casals within that list!  I've listened to the cellists that have come up in my "general" cellist search on YouTube (e.g. Yo-Yo Ma, Dupre, Maisky, Rostropovish, Starker, Finckel, Hauser & Sulic) and some alternative cellists (e.g. Sollee, Baker, Friedlander & Freudmann), but I'd never heard of most of the cellists he mentioned! Yikes - I've got to listen to a wider list of cellists! And do better with my YouTube searches!

Anyway, I was able to find Bach Suite BMW 1007 Gigue for all but Pablo Casals. I'll have to post my findings in another blog entry.

This was very similar to an exercise I did last year which I also bloggged about here, but I was listening more for phrasing, not tone or sound:

I told Clayton I was working on more volume and getting a better tone, so he asked that I play the Minuet in C how I thought Adam wanted me to play it. This led to an interesting discussion on what it meant to "grab a string" and how that's interpreted differently by each cellist. Grabbing a string for one cellist may mean putting a lot of the weight into the bow and string, while another cellist may interpret it being able to feel the "friction," or being able to grab the string and release it and use the momentum, or like me who thought grabbing a string meant that I could feel the bow and string "connecting" the entire time. I think I didn't understand what it meant to "grab a string" or what it entailed!

Clayton mentioned, that to him I always seem to be too heavy and choke the sound, whereas Adam thinks I'm too quiet and light. I wonder if I play differently when I play for them individually, or if they have different tastes in tone, or if its the room, or if it's a combination of all of the above. Although I think Adam and Clayton may have opposing views on sound production and tone, which I voiced to Clayton. He replied that can get frustrating sometimes since his two teachers have opposing views on some concepts as well.
Although I like getting two different perspectives - more tools in my toolbox!! :). I think it would definitely be fun to be able to play a piece to sound differently, which I'll try to do with Minuet in C when I post my video! Should be interesting... or a disaster! ;).

We went over the 3 variables to get a good tone, which was bow location, speed and weight, which I knew from my previous lessons with both Adam & Clayton, but he had me do some great exercises in trying to determine the tone. 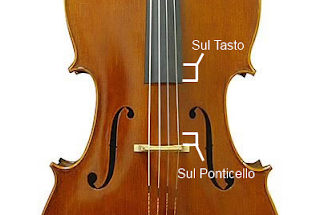 Ironically, it was really difficult for me to "loose the string" because I was working so hard to keep constant contact between the bow and string for the last few weeks. Which led to another great discussion regarding the relationship between speed and volume.

We did some experiments/exercises to test this. He put the metronome on 90 and had me play from frog to tip within 2 beats, which is a tempo I do NOT normally practice. Typically I have my metronome at 60, so this was definitely a stretch for me!

This led to another interesting topic on friction!
Instead of thinking about weight, location and speed, some cellists think of feeling friction instead, which to me seems to be a much simpler way to find the correct tone. This led to a conversation about having an open tone versus a closed tone, and it's relationship to volume and speed.

Clayton recommended that I work on the different variables, especially speed and increasing my tempo, feeling the string, and to play in different areas of the strings, which Adam had recommended as well.

He also recommended that I check David Finckel's Cello Talks on bow location and such. I've watched every video his, but this will be a good opportunity to revisit the ones regarding speed and tone.


I swear I've heard all this information before! I guess I just need to hear it a few times for it to click - building one small layer of info on top of the other before another part of the concept can really sink in!