Playing cello should always be this fun!

I recently came across this video of the Prague Cello Quartet and just absolutely LOVE it!! Playing cello should always be this fun right? :D

I've watched this several times and watched each of the cellists separately, and wow, talk about knowing how to play off of each other!! Check out their facial expressions and body language as they play!! So they've obviously played this together A LOT, but still!!

I know it's a bit silly, but I think it's FABULOUS!! And, they're obviously having a lot of fun playing too. They definitely get into a groove after the second half, and watching that part just makes me grin like crazy!! The JOY of playing cello!!!

Last weekend I had the honor of attending another cello studio's recital because another adult beginner cellist asked that I play with her during her recital in a cello quartet. We had been playing together for the last few months, which has helped immensely with my rhythm! Since we both were fairly bad at sight-reading - she was bad at reading notes and I was bad at counting / rhythm, we were able to work together and just really slow down and count out the notes together without feeling embarrassed or self-conscious about asking, "how do I count this section again?" or "what was that note again?" or "can we just work on these two measures and repeat it like five times?" or "do you mind if we just count this aloud - I'm getting lost in this section again!"
And we're talking about beginner pieces with lots of half and quarter notes! Totally not exaggerating either. ;)

To be perfectly honest, I think that's exactly what I needed: to go back to the really easy pieces and just slow down and count!

I've mentioned in past blogs that it was EXTREMELY embarrassing when I had to clap and count the rhythm aloud. I always felt that when we had to result to clapping that I just had an EPIC FAIL, and I wasn't smart enough to count and play at the same time! It felt like I just flunked a bunch of grades and landed right back in elementary school wearing a huge ol' dunce cap! ;) ...yeah, I know, I have some hang-ups, but that is exactly how I felt! And why it was so extremely embarrassing to do! 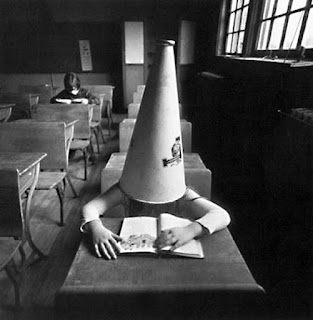 Anyway, I've come to the epiphany that clapping and counting rhythm is an excellent TOOL that I should be utilizing and that I shouldn't feel embarrassed about using it. After playing with another beginner for a few months, working on clapping during our play-ins, recital and a workshop, I no longer feel embarrassed about doing that! Yaay! :)
In fact, one of my "procedures" for learning a new piece is to clap out the rhythm first before picking up my instrument, and now I feel like when other people are having trouble I want to tell them to start clapping, but I keep my mouth shut in case they may feel the same way I used to.

Although... I have to say, I remember the cellists who did offer clapping pieces with me, and at the time it seemed pretty hopeless, but I think without numerous people telling me to count and clap it would have continued to fall on deaf ears! :) Good thing my cello teacher Clayton really likes this tool and is consistent about using it.

Not to say that I still have a ways to go with getting rhythm, but it doesn't look so hopeless now because I think I've finally discovered a tool that will allow me to get to the next step. I'm still trying to establish an internal rhythm for whole notes, half notes and quarter notes (told you, I'm TERRIBLE at rhythm), but now I'm sure it'll get there. Everything is slowly starting to sink in...


Another epiphany too! Well, kind of...
As I sat through the recital, the cello teacher had provided a program with an insert where we could write in comments. Of course, since they were mostly young kids I wrote comments like "Good job! Excellent volume!" or "Beautiful! Good bow separation!"- all with smiley faces or stars, but I always tried to find something good about each of their playing.

However, there were four students who really stood out that I had written something like "Well done!! Excellent tone and rhythm!" Later, after everyone was done playing, the cello teacher called the students who practiced their piece 100 times before the recital, and guess who those students were?
The four that I had recognized had good tone! It totally blew me away!!

There was one little girl who played French Folk Song and it sounded BEAUTIFUL (sounded better than some of the more advanced pieces!) and then there was another student who also played this song that sounded like my French Folk song, which wasn't as beautiful! ;). But then again, we both hadn't practiced it 100 times either!

Obviously I know practicing is what gets people sounding better and to the next level faster, but to witness that work with kids and to be able to hear a clear and extremely noticeable difference completely blew me away!! It has really inspired me to practice a lot during the summer!