I woke up really tired from staying up the last two previous nights, but I didn't want to miss anything the camp had to offer and feeling tired was a small price to pay to get as much from the workshop as I could! :)

He had us put our first finger on the C string on D, and then rotate our upper body to get the weight into the finger. He said the famous pictures of women looking over their shoulder is not because they're posed, its just good technique! For some reason, that concept just really sunk in and I was excited to start practicing this!

I tend to over exaggerate my movement - something my teachers are trying to break my habit of, so I've been working on less movement and being more calm, and I think rotating the upper part just a little bit to feel the stretch is what I was missing! I feel like it opens up the shoulder area and lengthens my arms more too. I'll have to practice this during my scales practice.

Burke also mentioned that the finger is just planted on the fingerboard while everything is relaxed. I imagine the fingers being like those clear plastic suction cups that are placed against a window or glass with a toy monkey or something dangling loosely from it. The suction cups being my fingertips and the loose dangley monkey would be my arm, shoulders or whatever.

He demonstrated this by having Jenny hold out her hand out to him and then had her move her body slowly away from him while keeping her arm and fingers (except for the tips) to remain relaxed, which creates the stretch and weight.

In Lindy Hop, we call this type of connection/feeling "stretch and release" and feels like a rubber-band tightening and loosening as our bodies move closer and  farther apart. 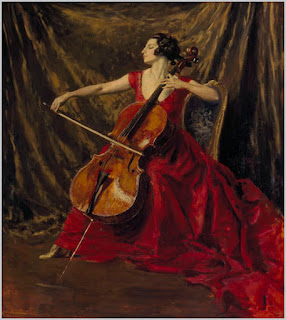 He said that we shouldn't be working hard to play the cello and we should be as relaxed as possible. It was quite amusing when he started playing the Dvorak concerto (one of my favorite pieces!) and then exaggerated being relaxed and proceeded to fall asleep with his head resting on the cello's shoulders as he played the piece! LOL! ;)
Both of my teachers had mentioned at one point in their cello education, that they were told / or heard that when playing the Dvorak concerto that by the end of the piece they should be completely exhausted and covered in sweat! So seeing him pretending to fall asleep playing the concerto was hilarious - who would be able to fall asleep to that piece any way? Ha! ;)

9:45 - 11:15 AM Rhythm Skills Series #3
We continued saying Ta-Ke-Ti-Na, but this time she had us also clap on the off beats. As we progressed through the class, Marcia tried to "trick" us by clapping different syncopations and other distracting things like dancing around in the circle and waving her arms crazily in the air. It was funny trying to watch her out of the corner of my eyes making funny faces and trying not to loose my rhythm!

11:30-12:45 Chamber Group with Elizabeth
We practiced more on the piece and we decided that we wanted to have instructors accompany us during the performance. After that decision was made, Elizabeth suggested we work on the different dynamics. She had us play really softly, and really loudly and then something in the middle. I think I was being too loud again and over-powering the other members of the group. I think the idea was to calibrate to each other to see what dynamics or different volumes meant for each of us.

At that moment I was really thankful for my two teachers: Adam for insisting that I work on volume and for Clayton for helping me with my tone. Attending both the workshop and camp, I noticed that volume was something that was usually on the quieter side. I now know why Adam was always on me for volume, even though I thought I was being loud when I really wasn't.
It makes a HUGE difference when I'm able to use different dynamics. Even though I was on the "louder" side with this chamber group, I think I could have been louder and it made me realize I'll have to start working on being quieter as well! Although for now, I think I'll continue on working on more volume.

Elizabeth also had us decide whether at the end of the piece if we wanted to crescendo or diminuendo. I voted for a diminuendo since that was easier for me to do, but everyone wanted to do a crescendo so we did that instead.

2-3 PM Free time
I practiced Largo with Jenny again since we felt like leaving the chamber piece alone, and continued to work on dotted notes. Surprisingly, I was able to count out the notes "1 & 2 & 3 &" while playing, which I wasn't able to do before. The rhythm class definitely was working! 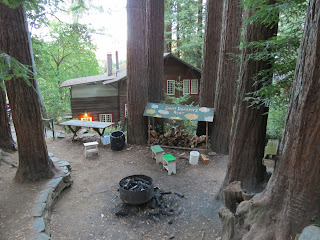 3:15-4:30 PM Concert: Chamber Groups
It was fun watching everyone playing their pieces and absolutely heart warming and great to see how supportive everyone was!

We had Burke and Elizabeth accompany our chamber group, and at one point Burke got up to write something down on the music before we started playing our piece and someone jokingly asked if he was writing down his fingerings, which got everyone laughing and more relaxed. He wasn't of course, which made it even more funny!
So while introducing our group, Beth commented that we were teaching the coaches how to play in a chamber group! It was hilarious! Everyone was just so relaxed and light-hearted about everything.

To be honest, I think we sounded better when we were practicing, and I actually had some issues with my intonation and couldn't find / blend with the rest of the group. I think my nerves definitely got me. Also, I've noticed that every time I have to perform in front of people, my brain kind of shuts down and it's really difficult for me to remember what happened while I was playing!

5:15 PM Free Time
My cell phone decided that it was going to start working again (darn you AT&T!) and I started to get wireless, so I spent some time on emails after having FOUR days of no contact with my husband or able to access email or text! That was tough!

6.30 PM Dinner
I don't remember what I had for dinner, but we had ice cream for desert! :)

7:30-8.15 PM Master class w/Burke
The trio consisted of the camp's assistants/instructors Karen (violin), Trevor (viola) and Elizabeth (cello). They played two movements of a piece and after each movement Burke gave them some suggestions.

It was funny when Isabel commented that they would purposely be making mistakes for Burke's benefit so he could make corrections and that we could all learn! Everyone was quite the comedian! ;) 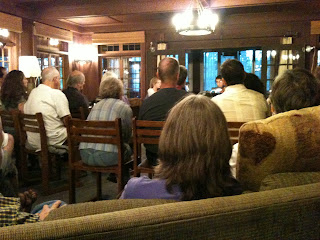 A few suggestions that he gave was when the notes are repeated it should be played similarly especially if using hooked bowings so the spacing between the notes stays the same, which also helps with articulation.

Also, when there are a lot of the same notes grouped together, it's nice to emphasize the first couple of notes so its easier to communicate when a phrase starts.

Trevor was having issues with intonation during a passage where he was playing the same note over and over again, so Burke commented that he shouldn't stay on the note if he wasn't in tune. During those measures Isabel was playing too quietly so he joked that she be louder to cover up his bad intonation! ;).
He didn't say it mean-spiritedly, and it was all in good fun, since they were joking back and forth with one another, but it definitely hit home for me because sometimes I get scared to move my finger to the correct spot because I think it'll be more noticeable and draw more attention to my bad intonation!
Although Adam did mention that no one has great intonation 100% of the time, and those who are able to react more quickly than others to fix it is what makes them sound better.

Another really great suggestion/exercise was when he had Karen and Elizabeth who were sitting across from one another, play and project towards each other to get a beating sound! To get the beating sound they had to match their volume and if Isabel was too quiet they wouldn't be able to  hear the beats. He mentioned that one of the famous quartets said they had a "fifth player" who was in the middle who they would constantly try to project their sound into. By the end of the master class, their sound was definitely sounding much more full and rich!

8:30-9 PM Evening of sight reading
We played Grandfather’s Clock - I picked out a really easy piece of music to play for beginners.

9:30 PM Chamber Music reading Burke’s Choice
The music was a bit difficult for me so I was struggling through the pieces.

Continuing his tangent on being in tune, he asked the group, "when are we in tune?" I jokingly said, "never." So he rephrased the question and asked, "when should you be working on being in tune?" To which someone replied, "always."

Things to work on: sight-reading, volume, rhythm and intonation - pretty much anything relating to how to play the cello! Lol! :)

Memorable Moment
In between the sight-reading groups, my roommate and I decided to play outside by an old shed to wait for our turn. We decided to play some Celtic music which she had brought with her to the camp, and we just had one of those "magical moments." She describes it much better than I do, but imagine this...

Against the dark background of the night sky, two beginner cellists huddle beneath a single lantern sitting on a rickety bench, their music illuminated by the soft glow of a single stand light. The gentle sound of cellos playing Celtic music echoes softly and eerily into the dark, drifting and fading into the surrounding redwood trees. The notes float into the quiet air, often jaggedly, sometimes smoothly, but every once in awhile, the notes blend to create a beautiful harmony, like clouds opening up to allow the moon’s rays to shine through...

Anyway, the next day, at breakfast my roommate shared with our table that she would always remember me and that moment, and proceeded to share and describe that enchanting memory with the group.
Then a few minutes later our hostess gathered our attention to make an announcement to thank us for being guests at the camp grounds. She thanked us and told us how wonderful it was to host this string camp and that it was quite a treat for herself and for the staff; and compared it to walking through a movie set while hearing beautiful classical music.
The hostess then proceeded to describe how late last night, as she was getting into her car, she heard and saw two cellists playing outside under the lantern, and as she drove away the music had followed her home, and that image and music captured what the camp was all about!

I don't think we were playing particularly well (...she must of heard us when the moon's rays were shining through! Lol!...), but it was really heart-warming that she had shared our moment with us and it had affected her, and we didn't even realize it!