I'll be typing these entries from memory since I didn't really take very many notes, so I may confuse the days or something, or not explain concepts as well as the instructors did so I'll correct and add more details as I remember them.


This camp is very nurturing and protective of their campers to ensure that they're able to have open up and relax in a nurturing environment, so unless its on their website or the faces are really blurry, I won't post photos of people. I'll change names as usual (except for teachers), and if I'm showing photos of the back of people's heads its on purpose. :). And if you recognize the back of someone's head, well...ummmm... you probably know them pretty well and probably know that they attended this camp anyway! Lol! :)

MONDAY
I woke up somewhat early to pack up my things at the hotel and call a cab to get to the camp. On the way there, we got lost through winding mountain roads and I knew immediately that this would be a wonderful experience! Getting lost on the way to a destination always bodes well for me because it reminds me of previous adventures that always seem to end very well! I can get into some crazy stories... but I won't. ;). 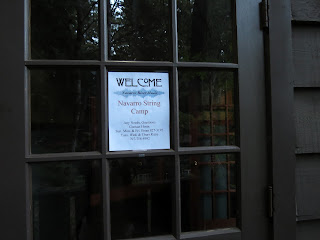 I arrived at camp and was immediately greeted by the both of the hosts of the camp and a couple of the instructors and was then taken to my dorm and introduced to my room-mate. Thankfully she was absolutely wonderful and sweet - I'll call her Sue.
She was older than me - maybe around my mom's age? I can never tell people's ages any more... This was also her first time to this camp and had also started playing approximately at the same time as me although she could also play the piano. Coincidentally, we both share the love of trying to play different genres with the cello and she was also working on some Celtic tunes. :).

One of my initial worries was how I was going to adjust to having a room-mate since I'd never had the college experience of staying in dorms, or staying in camp before, so I was really curious how this was going to work out. Therefore, I opted out for reserving a room with two beds instead of dormitory style accommodations. My thought being it would be easier to adjust to one personality than to a roomful of personalities.

After designating which drawers and shelves we were to use, we unpacked and was settled and ready for orientation in no time. Since we didn't know what to expect, we were both anxious and excited as we headed to the Main House for orientation.

11:45 Welcome & Orientation
We had arrived early, so we entered the cabin like building to find other campers milling around. We headed to the desk to pick up our name tags, which I was really thankful for. I have a LOT of trouble remembering people's names - not an exaggeration! Despite the fact I spent a lot of time practicing with my group and getting to know my roommate, I really didn't start to remember their names until the last two days! Yes, my memory for names is that bad - that I don't really pay attention much! My ADD kicking in! Lol! ;).

There was a sign up sheet for additional classes which I didn't know was going to be available. Unfortunately, the slots for the Alexander Techniques were full, so I signed up for some sight-reading chamber music instead.

The orientation started promptly at 11:45am, signaled by drums, with everyone heading towards the main living area. Like a moth to a flame, all of the new cello campers congregated in the same area in the back corner of the room as all of the “old timers” seemed to be catching up and greeting one another. As everyone quieted down, Marcia and Marion welcomed everyone and went over the schedule and introduced the teachers and assistants.

During orientation we were instructed to turn to someone and introduce ourselves and speak to them for one to two minutes. And yes, in most circumstances, this sort of thing is a bit annoying (I'm a fairly introverted person in the first place), but when you get a room full of people who are passionate about a certain subject and want to share that excitement it became really fun! The din of excited voices increased quickly to a loud roar, and for me it was very difficult to tear away from my conversations. We were then instructed to find and introduce ourselves to members who would be playing in our groups. This was a wonderful ice-breaker, which transitioned smoothly into lunch since everyone was conversing and introducing themselves already! ;).

1PM Lunch
My other worry was the food that was going to be served at the camp. I expected the food to be your typical “camp pre-prepared, cheap food," but I was pleasantly surprised that everything was fresh and tasted really good! In fact, I gained more than a few pounds even though I was walking more than I normally do in any given day while lugging the cello and stuff up and down hills!

During lunch they served a baked potato, beans, salad and some other food I can't remember. I know that doesn't sound much, but they had all the fixings for the potato so I loaded up on it!

2-3:15 PM Group B Meet in 2 groups for Chorale
After lunch we headed to the Chapel for our first class of the camp. We were given some music to sightread, which of course I'm terrible at, so I started to dread if this was how all of the classes would start. Fortunately it wasn't - though I really need to practice sight-reading more!

3:45 PM Group B Chamber Music
My next session was with my Chamber group, which I quickly discovered was up a fairly steep hill (steep for me, but not for others!) or steps up the side of the hill!

Two members of my chamber group were also in the same class with me, so we walked up the path together. I'll call them Beth and Emily. Beth was around my age and was a physicist, had played the cello for two years and this was her second time to camp, while Emily had been playing for about the same time as I did and was in her forties.

I'm pretty out of shape, so with the cello strapped to my back, my Peak portable music stand which I purchased specifically for this trip (HIGHLY recommended), music folder and wedge cushion, I ascended the hill. Beth noticed that my hands were full and offered her extra carabiner to connect my cushion to my portable stand to free up my hands, and in green to match my cello case too! :).


We walked up the hill and met in the "Farmers House" which was sweltering hot inside, especially after making it up the hill. It was hotter in the inside of the house than outside, so after our session was we decided to practice outside.

5:30 PM Free time
Our piece wasn't meshing well together, so we broke down the piece measure by measure and repeated them three or four times to get used to hearing the harmonies and by the end of the hour we were sounding much better!

6:30 PM Dinner
Pasta and salad, and for desert apple cobbler with whip cream!

7:45 PM Large Ensemble
Luckily for me, there was four people in part two, which was nice since I didn’t practice this piece and we also ended up doing divisi so two cellists took the upper notes (me being one of them) and two doing the bottom notes.

At the end of the day I was tired but looking forward to the next day, although I had trouble falling asleep with the new environment and thoughts of cello concepts and techniques running around in my head!

I also noticed that my cello LOVED the humidity in California. He was responding much more easily; that is, the strings were so much more easier to move and the volume seemed to be considerably louder and richer with less effort on my part. I may have to look into humidifying my cello...