It's been very difficult to keep the cello ensemble I organize and my personal cello-learning (cello blog) completely separate since they overlap so much!

My thought was that I didn't want my personal feelings and opinions to reflect poorly on my cello ensemble, which was the primary reason I kept them separate. I swear I've been busy practicing cello! ;) But just couldn't (and didn't have time) to write about it due to my conflicting ideas of keeping my two projects (cello blog & cello group) separate.

My other reason? I rarely have time to practice (too busy organizing!) so when I attend other events I really enjoy being a participant so I didn't want to put it out there that I organize my cello project. I also tried to avoid talking about the project when I was at events because then the focus became about the project and not my learning (selfish, I know!). Unfortunately, it also made me look a bit... um, not nice. ;) Apparently it's expected that one talks about their cello ensemble since it should be a source of pride and joy, right?
I've since discovered that once one falls into the "organizer role," it's really difficult not to volunteer, help out or talk about one's project no matter how much one tries! So why fight it?

I'm also fairly introverted, so I like sitting back and watching people learn to play cello and it's difficult for me to open up to people, so it's really weird (for me) when random people approach me to ask me about my blog and cello group...

"Hey, aren't you Gemini Cello? I just read your blog..." Totaling freaking out on the inside, "Wah??? How did you know that?" ...apparently from the YouTube videos. ...aw, crap! Should have put a blur over my face or something!

Or, "So and so, said you organize the project, so what's that all about?"
That always catches me off guard (I should know better by now!) and then I get all flustered and don't provide a very coherent description! *sigh* ...such a spaz...

Anyway, I wanted to keep some anonymity, but obviously videos were a dead giveaway so I should probably stop worrying about that one! Unfortunately, I'm definitely not the best "face" for my cello ensemble project either since I can be really aloof and weird sometimes! Lol!

Long story longer, I think it just takes up too much energy to keep them separated, and I really need to start writing about my cello experiences so I don't get off track, which I feel I've been slacking quite a bit on keeping to my schedule of posting videos and entries!

Many have you have already figured it out, but my cello ensemble project is the Boulder Cello Project (BCP). I had initially started it because I wanted to play with other beginning cellists (I'm still very much a beginner myself!) and there weren't any opportunities locally for me, so the group was started with the help of my cello teacher Clayton (who has since left). Now it's become more about "creating a community of cellists to learn and share our love of music and the art of cello playing," and making the cello accessible to all abilities and levels! The project has grown quickly over the last year and a half and we now have over 90 cellists participating in the project.

Clayton provided all the "music know-how" like selecting and recommending music, concert programming, leading our play-ins, rehearsals, concerts, etc. while I did the "organizing" like marketing (website, flyers, etc.), scheduling, event planning, sponsors, collaborations, etc. We made a good team! ;) It's a lot of work which is why I haven't had a lot of time to update entries or post videos! ...I know, I know - excuses, excuses!

Hopefully "revealing" my other cello-related activity will allow me to write more freely regarding my cello endeavors and experiences, which will help me progress faster since I feel like I'm using more energy organizing my cello ensemble and keeping them separate, then on my own cello learning progress!

Anyway, I'm currently practicing and preparing for our holiday concerts below. Now that I can write about BCP, I'll write about my experiences during my next entry! :) 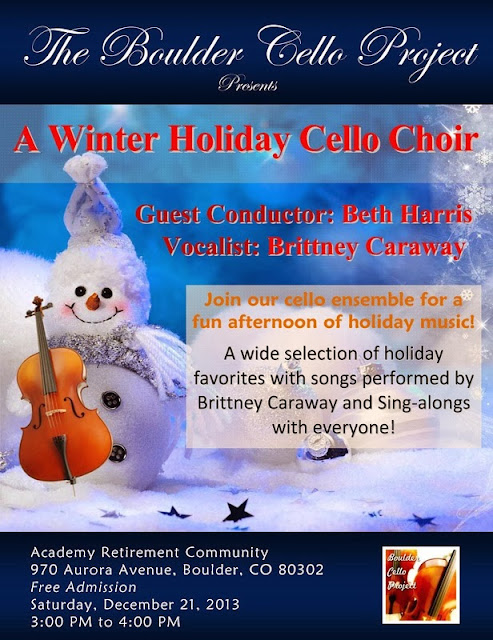 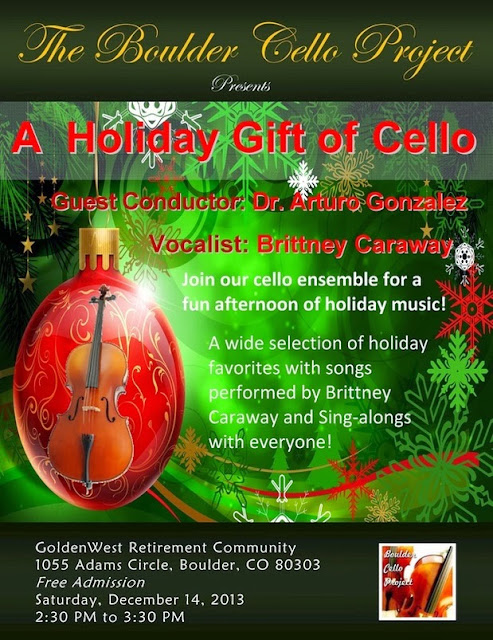