I'm doing a bunch of quick posts to catch up with my notes, and will probably update or add to these later as soon as I get caught up with my entries.

I had a horrible wolf tone on my D string, which my teacher pointed out later when I hit a wolf tone during my recital. Adam explained that every cello has a wolf tone, and the wolf tone is typically found between D and G - usually around F, like mine does.

The wolf tone was not present before; however, I read that better instruments and correct finger positions will produce the wolf tone. So on the positive side, my cello is a definite step up from my initial laminate-rented cello and I'm finally getting my fingerings correct! :)

This is a great article from Strings Weekly on wolf tones: How To Tame Annoying Howling Wolf Tones by Sarah Freiberg.  A paraphrase the article and some additional notes below.


What is a wolf tone?
A wolf tone can normally be found on the lower strings of the cello and is a result of the instability between the vibration of the body of the cello and the vibration of the affected string. The air volume and the top, or the air volume and the back tries to cancel each other out. When the sound waves are slightly out of sync, the wolf tone appears - the sound gets louder for a bit and then the waves cancel each other out. There is so much energy when the two notes are out of sync that the top of a sound wave's pitch goes UP and at the bottom it goes DOWN.  The vibration of the affected string has barely begun to sound when it disappears and is repeated again. which leads to an oscillation, howling or out of tune note.

Well-made cellos have stronger wolf tones:
Every well made, properly proportioned cello has a wolf tone and the wolf is not the result of a basic structural failure, faulty repair job, or misplaced soundpost. It's just a characteristic of the cello because the process of amplifying the sound of the string through the body of the instrument is imperfect.

Better sounding instruments tend to have stronger wolf tones because powerful resonances are required for good-sounding cellos, which increase the likelihood of wolf tones.  Also, if your cello is in good adjustment, the wolf can be more pronounced. This is because a cello that is not well adjusted has pitches that are wobbly so a ring is not present when playing and harmonics will be off pitch. When harmonics aren't matched, there is a range of pitches for each note and nothing is focused, so the wolf can hide or make for just general "wolfy" areas.

It's a good idea to bring your cello in for an adjustment first to ensure the bridge and soundpost are fitting properly, which will allow for better assessment of the wolf problem.

Wolf on D string:
If the wolf is noticeably present on the D string and the wolf 'stuttering' on the D string in first position is easily elicited, then the soundpost may not be giving the cello enough support and may need to be repositioned, tightened, or a longer post may need to be made at the point - so bring your cello to a luthier for a checkup. However, setting the soundpost may make a stronger sound, causing a stronger wolf to appear. Finding the optimal balance between maximizing the sound of your cello, but minimizing,taming a wolf is key. Unfortunately, there is no perfect solution.

Still on my to-do list: bringing my cello to my luthier to check to see if my wolf on D string can be tamed if adjustments are made to the soundpost or bridge of my cello.

Selecting a surpressor - less is better:
Don't put on a heavy wolf eliminator if you can get by with something less intrusive because wolf eliminators also act as filters and can dampen the sound of the cello. Since all good cellos have a wolf, any eliminators take away from the voice of the instrument in one way or another to a lesser or greater degree. Less is better, here's why:
The goal is to find the least invasive wolf eliminator to the cello's whole acoustic system while retaining a high degree of success with the cello player.

Types of surpressors/eliminators:
1) Single rubber mute - the cheapest and easiest wolf suppressors you can use - you may already have one at your disposal. Since the most bothersome wolf usually hovers around fourth position on the G string, put your mute there (between bridge and the tailpiece).

2) Wolf suppressors on individual strings - If a mute doesn’t do the trick, there are wolf suppressors that fit on one string—in that same area between the bridge and the tailpiece. The usual on-string suppressor consists of a brass tube encircling a rubber tube, held on the string by a screw. Below are two of the most common wolf suppressors used. There are others, but these two were the ones that were highly rated in forums:

Here's a helpful YouTube video explaining one of the methods: Finding and Fixing a Wolf Tone

1) Mute locations - Match the pitch of the string between the bridge and the mute to the wolf tone, or to a harmonic of the wolf and should get your to the right position. This will usually be about three-quarters of the way towards the bridge.

2) Suppressor string locations - as with the mute, match the pitch of the string below the bridge to the pitch of the wolf. Sometimes, a wolf suppressor "works better on the C because you allow the G string behind the bridge to enhance or vibrate sympathetically with other notes on the musical scale. Plus, with G strings made smaller in diameter these days, they aren’t able to add mass (along with the suppressor) to help with the suppressing job."


Other options:
1) Adding a tuned resonator to the top of the instrument.  The Wolf Resonator comes in three specific ranges (D to E, E flat to F, E to F#) and costs about $52. This is basically a spring-mounted weight that compensates and thus suppresses the distrurbing vibrations. The device can be installed inside or outside the cello with putty.
2) Add a finger - You can lessen the severity of a wolf tone by placing an available left-hand finger on another string at the pitch of the wolf or an octave of it.

3) Use your legs - Squeeze the cello with your legs to prevent the cello from vibrating when you bow on the wolf note.

A wolf tone is unique and individual to each cello and cellist. Since every cello and every setup is different and requires different solutions to remove wolf notes, I recommend exploring the many different solutions and finding one that works for you. There is a lot of information out there, but hopefully I covered all the important items. Below are some helpful forums, which is also where I started my search on this topic.


And the winner is...:
After my research I settled on the Lup-x Wolf Tone Eliminator for a couple reasons:

1) I read through a lot of articles and forums and there were a lot of good reviews on Lup-x
2) I didn't want to go through the hassle of buying different grams through New Harmony and then returning the ones that didn't work. Also, I have very limited knowledge on placement of the eliminators (only what I've read) so I didn't want to spend time moving around 5 different eliminators to try to find the perfect spot for each one, and I already spent a lot of hours researching wolf tones and its eliminators, so this extra step didn't appeal to me.

I purchased the Lup-x and decided to bring it to my lesson and have Adam put it on my cello instead. When I handed it over to him he mentioned that he used the same one! Wish I would've known that before researching it so thoroughly, although I did learn a lot about wolfs tones. I guess it was a good decision on my part. I could also add that to my list of reasons to purchase Lup-x - because my teacher uses it! :)

My cello with Lup-x Wolf Eliminator: 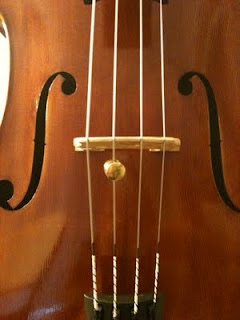