Introduction - how I started, my cello, and brief synopsis

I decided to start blogging about my cello journey after reading quite a few other blogs and recommendations that blogging was helpful in progressing through one's studies. I was sort of writing a blog on my laptop in Word so I thought it would be best to transfer those and reorganize some of my thoughts into Blogger instead.

I'm turning 30 today (5/29/2011), so also I thought it would be interesting to see how much I could improve by my 31st birthday. My plan is to post a blog and video at least once a month.
How it all started:
This is my first instrument and like most adult beginner cellists, I've always dreamed about learning how to play the cello!

My co-worker (Mike C.) who is in his 40's, started playing the cello, had started bringing his cello to work when his lessons had moved to Wednesday nights after work. It was a surprise to us all when we found out that he was playing the cello, so we started asking him a bunch of questions about his lessons. He had been playing for about a year and I thought was already playing fairly well!
One of the reasons I was so hesitant about taking cello lessons in the past was because I didn't know anyone who played the cello (until Mike started) and I didn't know how difficult it would be. All I knew was it was the most beautifully rich sounding instrument I'd ever heard, which I still think so today! I also had no idea how I would go about acquiring a cello. At the time, I didn't know renting cellos (or any instrument for that matter) was available! By seeing him accomplish his goal of playing the cello, getting advice as to how to acquire a cello and seeing how far he had progressed in one year - made taking lesson less daunting and spurred me to action!

I was short a couple credit hours to become a full time student, so I signed up for a 2 credit hour Beginning Cello class at the university.
During my first lesson, my teacher Adam went over the cello basics: how to care for the cello, named the parts of the cello, named the strings and showed me how to pluck the strings (pizzicato). I was assigned the Suzuki Book #1 and was introduced to Twinkle on my second lesson on February 23, 2011 (plucking only with no bowing yet).
During the first few months (January through the beginning of March) of signing up for my lessons, I didn't practice very diligently or consistently because I was swamped with school and work (full time work and school); and the first quarter of each year is a very busy time for me at work because I work for an investment firm. So I was only practicing 2-3 times a week and only for about 10-20 minute. Nevertheless, I fell in love with practicing and learning about the cello!
Purchasing a cello:
I decided to purchase a cello on April 13, 2011 after my teacher, husband, online researching, etc. gave me the same advice - purchase a decent quality cello (one that fits within your budget) even though you're a beginner!! I had a rented a laminated cello for $49/mo.and thought, "I'm a beginner, there's no way I could hear the difference between the two! My ears aren't discerning enough!"  I wasn't one to to listen to classical music (until I started playing the cello), which I also thought put me further behind than those who did listen to classical music.
Long story short, the difference between a laminated cello and a good cello is unmistakable, even to an untrained, non-classical listening beginner adult like me!! HUGE DIFFERENCE! My teacher said to look for a ring to know if you have the right note. I always thought I could hear a ring from the laminated cello - boy was I wrong! So I agree wholeheartedly, don't rent a laminated cello!
I went to a local luthier Reed and did a rent-to-own plan. My cello cost $1,800 and I also purchased a Coda-bow for $600. My luthier gave the advice that a bow should cost around 1/3 of the cello. Again, I thought, "Wow, that's really expensive! How could a bow make that much of a difference in sound?"....silly me! He demonstrated on two different bows, and again, it was really noticeable! My pretty cello below - LOVE my cello!! <3 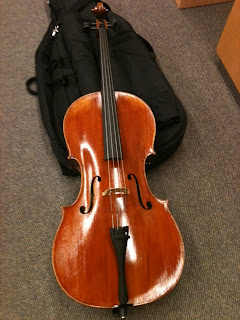 Helpful feedback and advice is always welcome! Thanks for visiting!
Posted by Gemini Cello at 12:39 PM