My first day at my first cello workshop. :D

Apparently this year will be their first time that they have two adult groups so it was nice know that there are a lot more adult at this workshop this year. I think there were 8 or 9?

First Chamber Music Group Coaching
My - hhmm...what do I call them - team mates? (shows you how little I know about chamber music!) were really nice. They had the same mini-freak-out as I did when they received their music too so I felt better about my reaction when I received my music. :)


Both have played a year longer than me, but I was able to keep up, although I have to admit I broke down and penciled in my frets!! *sigh*
Although I'm glad I did because I was out of tune more than a few times and had to look down at the frets to get my bearing! Darn, I'll have to take it off later.


Our chamber coach broke it down measure by measure and we played through the piece and surprisingly at the end of the hour session we were sounding 100x better! It felt like a very short class which I enjoyed a lot.


Teacher Recital
It was really fun seeing all of the faculty play in a cello choir. I'm not sure if I was allowed to take photos or not, but there so darn blurry I guess it doesn't matter! 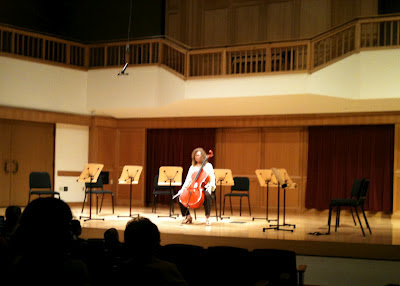 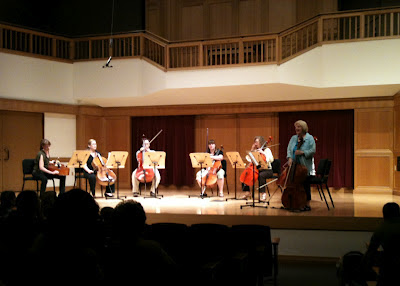